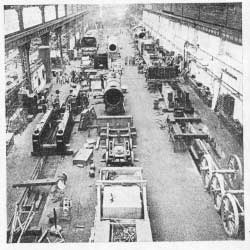 While recovering from WWII the Isetta started it's life in Italy in 1953. The car did not have much success so ISO (the little Iso), the maker of the car in Milan sold the design and the manufacturing rights to BMW (Germany). The Isetta was an instant success and some say that this fact saved BMW from closing down.

BMW in turn sold the manufacturing rights to various companies around the world, one of which was "Isetta of Great Britain, Ltd".

Once the Dunsfold Tools Ltd., The Locomotive Works, Brighton became, Isetta of Great Britain, Ltd., building started on a miniature car in a factory whose only access to the road was down a flight of over a 100 steps.

Part of the British Railways locomotive works at Brighton, adjoining the main station, was going out of commission. In March 1957, the last repair jobs from that bay were being completed, and the last new steam locomotive from the Brighton works despatched. The contractors moved in the same week, assembly lines, welding jigs and electrical plant followed. Three weeks later, 70 ton railway engines had given way to 7-cwt cars, assembled in the same place by many of the same hands, which proved the adaptability of men as well as buildings. Production started in the ex-locomotive shed on 23rd April 1957.

The plan, however, involved more than just taking over floor space. The old locomotive works was at the top of a precipitous hill, it could not be reached by road. If parts had to finish their journey by rail, why should they not start that way especially as the components arriving from Germany had to do so? And for the delivery of complete cars there was a great deal to be said for the railway.

The design for the new and highly original factory was produced by B.M.W. for the British company and its essence is shown in the diagram below.

Of the three railways tracks only the middle one was left, for supply and delivery, while inspection pits beneath the side tracks were put to good use for the installation of endless conveyors.

From the raw pressings received from Bavaria, and welded on jigs proof-tested at the German factory, the bodies were built on one line, pass into and out of a modern paint shop in a loop, and then arrived at a point half-way down the opposite line on which the chassis frames had taken shape.

At the end of the final assembly, 25 cars arrive at the top of a loading ramp which apart from spaces beside the assembly lines themselves, was the only "store" in the building. 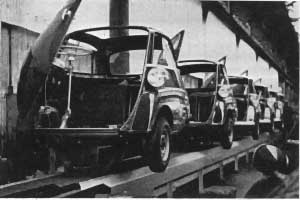 The production programme looked, naturally enough, like a railway timetable.

The Brighton goods depot accumulates during the week a trainload of parts sufficient for 250 complete Isettas; engines, transmissions and body panels from Germany; electrical gear, brakes, tyres, suspension and other parts from the Midlands; small metal components from Shoreham and other local sources.

On Saturday morning a week's supplies were unloaded from the central track to the delivery points in the factory. At 7.30 am each day from Monday to Friday, and again during the lunch-time break, the shunting engine withdraws eight flat wagons carrying three Isettas apiece, and leaves eight empty wagons in their place. Sixteen wagons travelled nightly with the express freight train from Brighton to London, and thence to anywhere in the country.

The last link of the transport chain was the dealer or, if he chooses, the customer himself, who was able to collect from his local railway station a car with a total distance on its recorder of approximately 25 yards.

For the first few weeks the whole production effort was concentrated on an order of 1,000 cars for Canada. Left or right-hand drive presented no problem in assembly of the Isetta, and production was flexible within a range of six models. The Canadian cars were built with left-hand steering, heavier bumpers and electrical systems to suit local conditions.

The mainstay of production for the British market was a cabriolet and a saloon for a remarkable figure of £359 17s. 6d. with purchase tax. For a four wheeled Vehicle bearing the full weight of 60% purchase tax this was real economy motoring. The lower rate applied to commercial vehicles brings down to £299 17s. 6d. and £307 2s. respectively the prices of the last two models available, a miniature pick-up and a "lorry."

Around the Isetta Factory 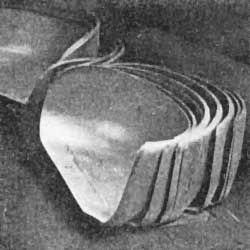 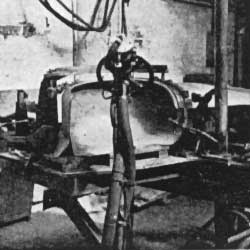 The start. Body sections and wheel arches are selected and united to form Isetta shells

Part of the welding operation, with arches and body mounted on a special jig 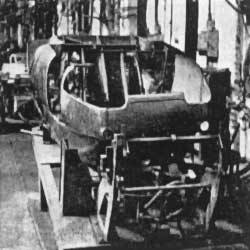 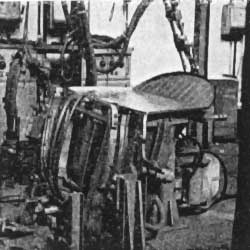 Upturned, the body is prepared to receive floor section which has to be welded in.

The rear shelf is grooved for strength. 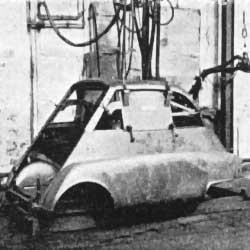 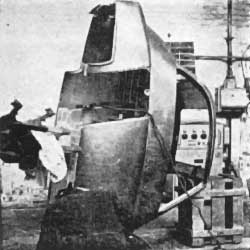 Additional welding, then grinding down of weld marks, on the body 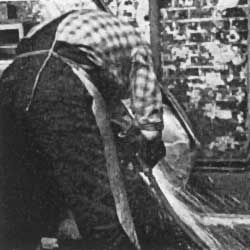 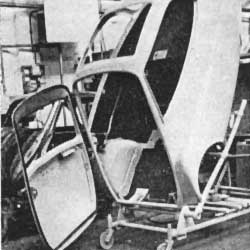 Smoothing faults in the bodywork.

After spraying: door is fitted on the Isetta body and is then taken on the production line. 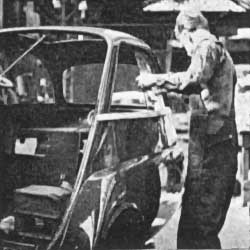 The windows are fitted and tested for free movement in their frames.

At the height of production the Brighton factory output one and a half cars per man per week. That translates into something just over 300 units.

BMW took over the manufacturing of the Isetta moving the factory to the Victoria Road site, Portslade, brighton until production finished in 1964.