Recently, I was in the locality of Brighton, and so took the opportunity of investigating the site of the former works of Isetta of Great Britain Ltd.

As you will no doubt know, the works were sited in the former locomotive engineering works in New England Street, Brighton, and so, that was our first location. It took a while to find New England Street, but finally, we were parked on that road, and I went exploring, aided by the New England Street Library which is situated at one end of the Street. As it turned out, the wrong end.

I first looked up what I could find out about the locomotive engineering works prior to Isetta of Great Britain moving in and I found out that the site had been part of the British Railways locomotive works at Brighton, adjoining the main station, and went out of commission in March 1957, when the last repair jobs from that bay were completed, and the last new steam locomotive from the Brighton works dispatched. The contractors moved in in the same week, and assembly lines, welding jigs and electrical plant followed. Three weeks later, 70 ton railway engines had given way to 7-cwt cars, assembled in the same place by many of the same hands, which proved the adaptability of men as well as buildings.

Production of Isetta's started in the ex-locomotive shed on 23rd April 1957, although the site wasn't the greatest for a car factory. The only possible access to the road was down a flight of over a 100 steps! The plan, however, involved more than just taking over floor space. The old locomotive works was at the top of a precipitous hill, it could not be reached by road. Since the car parts had to finish their journey by rail, it seemed a good idea that the vehicles should start there's that way, especially as the parts from Germany had to do so? And for the delivery of complete cars there was a great deal to be said for the railway.

The last link of the transport chain was the dealer, or, if he so chose, the customer himself, who was able to collect from his local railway station a car with a total distance on its milometer of approximately 25 yards!

The production programme looked, naturally enough, like a railway timetable. The Brighton goods depot accumulated during the week a trainload of parts sufficient for 250 complete Isettas; engines, transmissions and body panels from Germany; electrical gear, brakes, tyres, suspension and other parts from the Midlands; small metal components from Shoreham and other local sources. On Saturday morning a week's supplies were unloaded from the central track to the delivery points in the factory. At 7.30 am each day from Monday to Friday, and again during the lunch-time break, the shunting engine withdrew eight flat wagons carrying three Isettas apiece, and left eight empty wagons in their place. Sixteen wagons travelled nightly with the express freight train from Brighton to London, and thence to anywhere in the country.

Of the three railways tracks on the factory floor, only the middle one was retained, for supply and delivery, whilst inspection pits beneath the side tracks were put to good use for the installation of endless conveyors. The raw pressings received from Bavaria were welded on jigs proof-tested at the German factory, the bodies were built on one line, past into and out of a modern paint shop in a loop, and then arrived at a point half-way down the opposite line on which the chassis frames had taken shape.

At the end of the final assembly, 25 cars arrived at the top of a loading ramp which apart from spaces beside the assembly lines themselves, was the only "store" in the building. At the height of production 300 vehicles were built every week, which worked out at one and a half cars per person per week on the assembly line.

Isetta of Great Britain Ltd closed their site at the Locomotive Works, on New England Street, in 1964, and the site remained in a derelict condition intil 1969, when it was demolished. In the early 1970's a 900 car capacity car park was constructed on the cleared area here, and this car park, the largest in the Brighton area remained in operation until the 1990's.

Currently, small parts of the area are up for short term lease, (1 year max) where car sales, garage lock ups, and the like are available, but many stolen and burnt out vehicles end up here, gypsies camp here, kids sniff glue here, and, what is now the largest piece of derelict land in Brighton is soon to end up under the redevelopment of what will be the New England Square, being built in 2003-2004 by a development company called Q.E.D.

This set me thinking that perhaps in the Clubs Silver Jubilee we should present a plaque to be mounted as near as possible to the area where the railway line entered the factory, and dedicated to the 30,000 odd cars built there over the years. I propose a design of plaque something like this:

Every Isetta built in the UK left the factory up this rail track.

Completed vehicles were stored in this area of the factory, awaiting departure by rail. 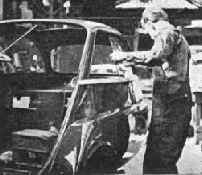 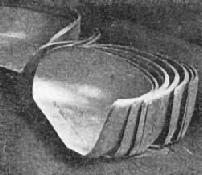 Rail entrance into the factory site was along this pathway through the gates.

End of the factory, where the bodies from the paint shop were wheeled across to their chassis.

Car bodies and chassis were married up in this area of the factory floor. 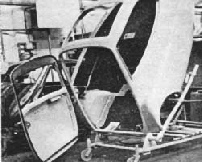 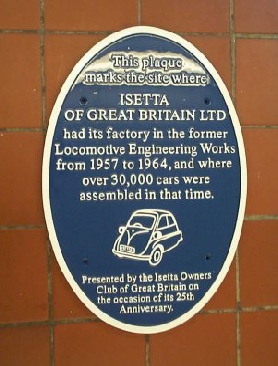